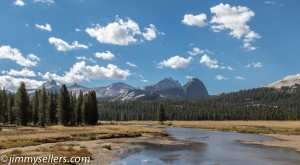 The final hike of the trip was a doozie. It had everything you might want in an adventure. Action, suspense, drama, cowboys, people getting lost, and waterfalls. The journey for the final day was mostly a circle starting from our tents, heading to the high country camp Glen Aulin, and then back down to civilization and Tioga Road. We started early and picked up the Pacific Crest Trail not far from our campsite. The PCT is the west coast equivalent of the Appalachian Trail on the east coast. It is a footpath through the wilderness that runs from Mexico to Canada. It has been my life long dream to set foot on the PCT since I first heard about it 2 months ago. Imagine how excited Josh and I were when we saw Pacific Crest Trail on the Yosemite map of the high country. It didn’t matter where that trail was, once we saw it, we were going to walk on it. The walk up to Glen Aulin was beautiful, mostly along a river with sporadic waterfalls. The only downfall was the time when Josh and Matt lost me. We were all together one minute, and then separated for the next hour or two. I was never worried, I had a GPS machine, and they had the power of numbers, although one of those numbers was Josh. I realized there was a problem when I ran into a cowboy, yes a real life cowboy, riding a horse, wearing chaps and a duster, carrying a gun, and leading a large line of donkeys. I asked the cowboy if he saw 2 other hikers the way he came from. He said no, I said no problem I’d meet them at Glen Aulin. He told me Glen Aulin was behind me. I wanted to argue because I’m so smart, but he was a cowboy with a gun. I turned around and starting running in the other direction hoping to catch the other guys as quickly as possible. Running might be overstating the forward movements I was making, but I tried. I went about 2 miles out of the way, which does not sound like a lot of distance, but it is a lot at that elevation, incline, and running as fast as possible. I finally met them just as they were getting to Glen Aulin. They were planning to wait for me there if the need arose. I think I pissed one or both of them off, I apologized and explained what happened. It was an honest mistake, even a sweet boy like me, with my own GPS machine could get turned around and go the wrong way in the woods.

From Glen Aulin it was mostly down hill and back to Tioga Road. This was not a full loop, we got picked up by Dan and Drew at a parking area near the trailhead. I really wanted to hitchhike back the 10+ miles, but nobody else was into that idea. I hang out with unadventurous bums. The last of Yosemite 2014 pictures can be found HERE. Also a “Best Of” pictures page is HERE. Thanks for reading.

We made our move of camps from the Yosemite Valley to the high country and Tuolumne Meadows. Once there and camp was set up we immediately set out for a hike straight up in the air to Elizabeth Lake. We hiked across the 9000 foot elevation point to about 9500 feet. Once at the lake we circled the entire lake and took some time to scamper up and across some rock formations. I believe this particular hike, in conjunction with the time of day and weather conditions made for the best photo opportunities of the trip. You know the conditions are great to take pictures when even a life long seasoned professional photographer like Matt was super excited to take pictures. A place he has probably shot several times before, and I could see his boyhood excitement. The mirrored effects of the mountains, sky, and clouds off the water were spectacular. It was the most fortunate of timing for us. The entire hike was great, the weather cooled down nicely because of the elevation and late afternoon. We made it back down to camp just around sunset. Perfect time to put on warmer clothes, eat some food out of a bag, and bundle up for sleeping in the cold. I fooled around with some of the pictures. Some I made the way I saw them with my eyes, and a few I made with some fun effects that I like. Some pictures HERE. 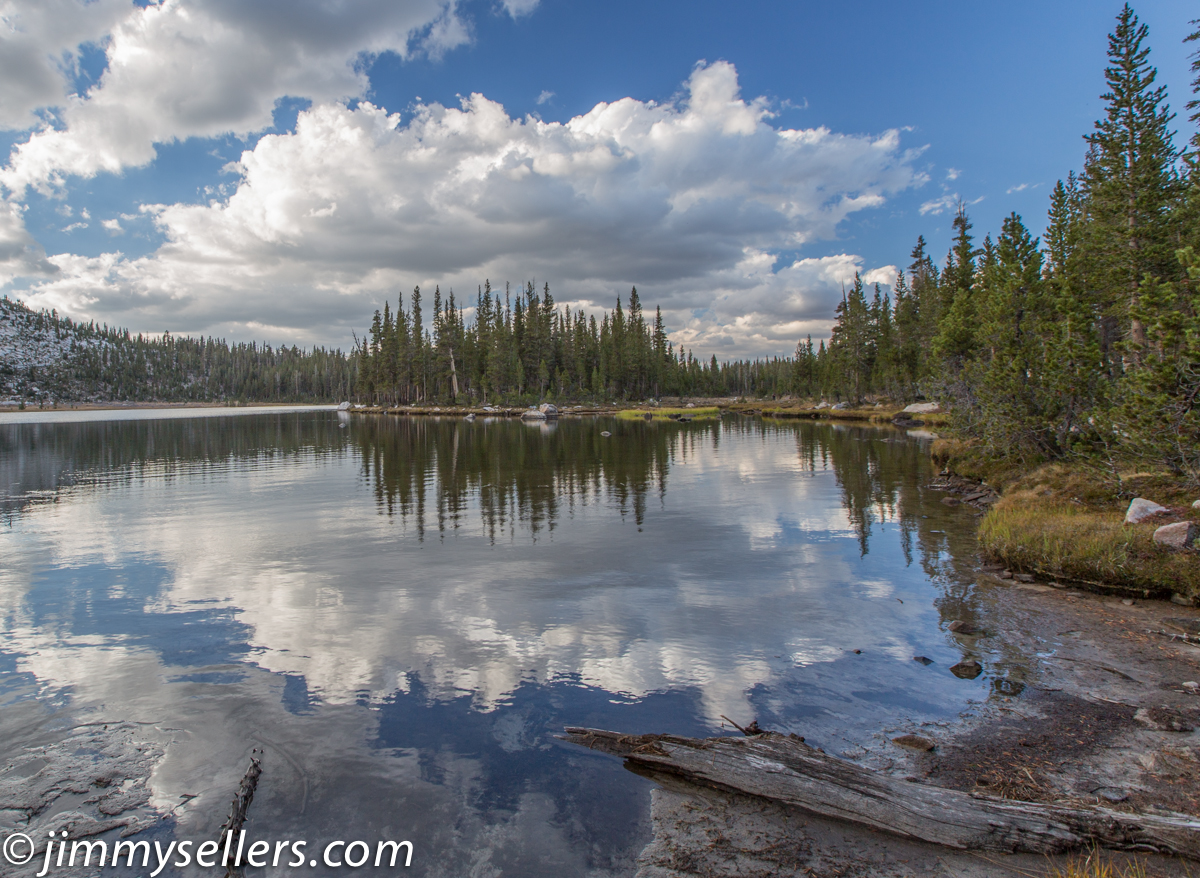 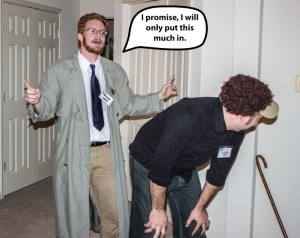 Last night was my 40th birthday party. Thanks to the most wonderful Wifey in the world and my awesome friends and family for throwing me a fantastic party. We all had a blast with the Murder Mystery Party. It went over a million times better than I could have expected. I wore a cape all night because I am awesome and it was my special night. Thanks again to everyone involved. Pictures HERE if you are bored. 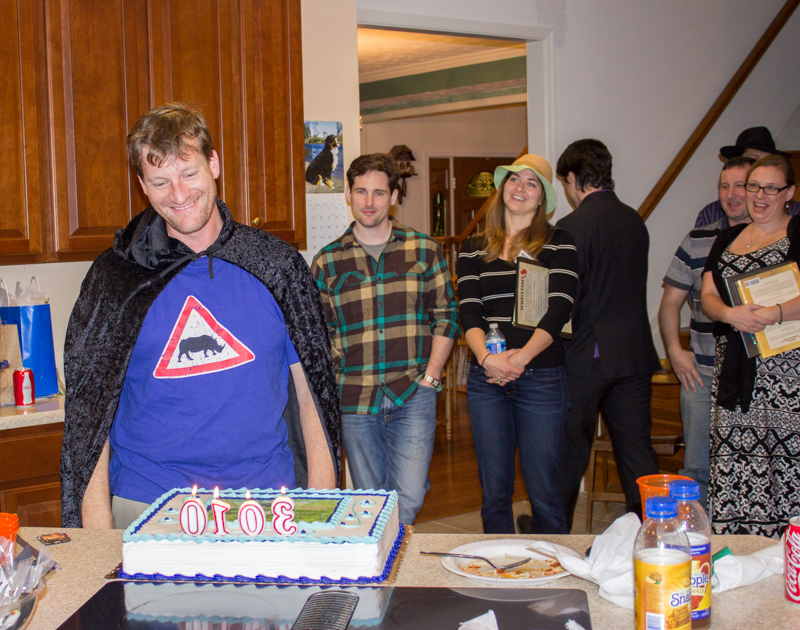 After a few nights sleeping outside in the Yosemite Valley, it was time to move camp to the high country. We packed up camp and started driving to Tuolumne Meadows. As the crow flies it is only about 20 miles, probably less. But it takes 3-4 hours to drive there. The elevation climb is several thousand feet and the drive is across the beautiful ridge of Tioga Road. We came up to the high country of Yosemite last year, but only for a day trip. This year we were going to sleep outside, under the stars for a few nights, and wake up in the most beautiful part of the park. As Bob Hrabek the park ranger said to us as we entered, “Welcome to Paradise”. He wasn’t kidding. Ranger Bob then proceeded to hook us up 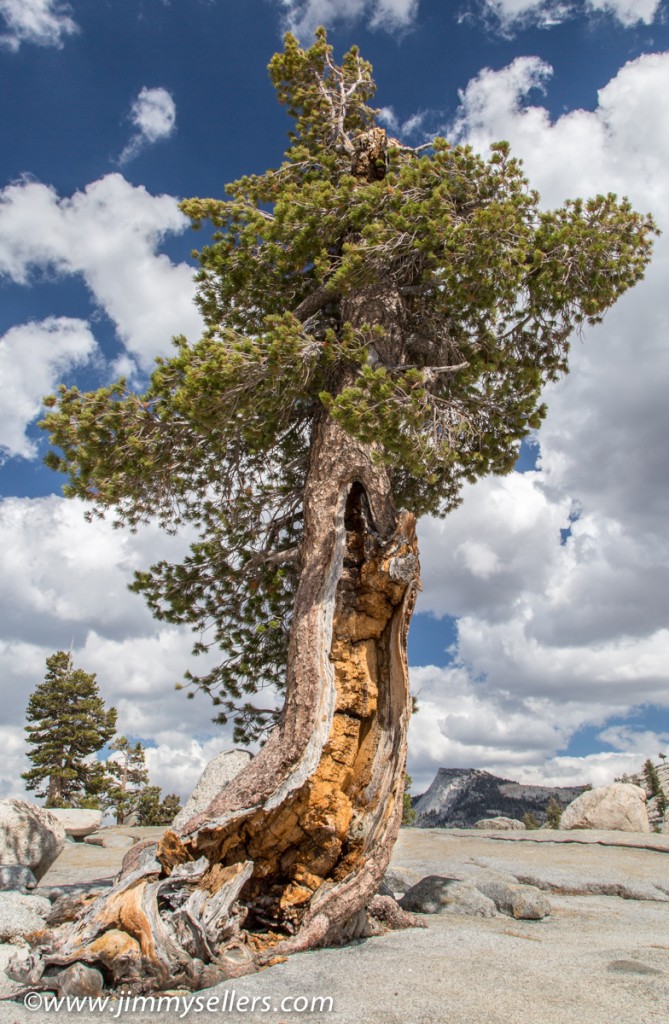 with what must have been the best campsite on the grounds. We were nestled in the trees and backed right up to the trail that lead to everywhere you could possibly want to wander. A giant change from down in the valley. The climate changed too, once the sun was gone it was freezing. Perfect for sleeping outside.

On the drive up to our new home we stopped at Olmsted Point. Another place we stopped last year, but completely different this time. The weather and skies were very cooperative for photography. The skies were deep blue with cotton ball clouds. I was able to capture a picture of a tree I loved last year, but couldn’t do much with it on camera because of a dull sky. We marched out to the Point for another view of Half Dome, and then continued to our new home in Tuolumne Meadows. Once there we set up camp and went for a hike straight from our tents to Lake Elizabeth. It was an elevation change of over 1000 feet, maxing around 9500 feet. Elizabeth Lake is were the most amazing photo experiences happened, while we were there everything changed to make for the perfect conditions. I hope I was able to capture something. I will find time to get to those photos next. For now I was able to get through a few more photos, Olmsted Point and our hike toward Elizabeth Lake. Those pictures are HERE. 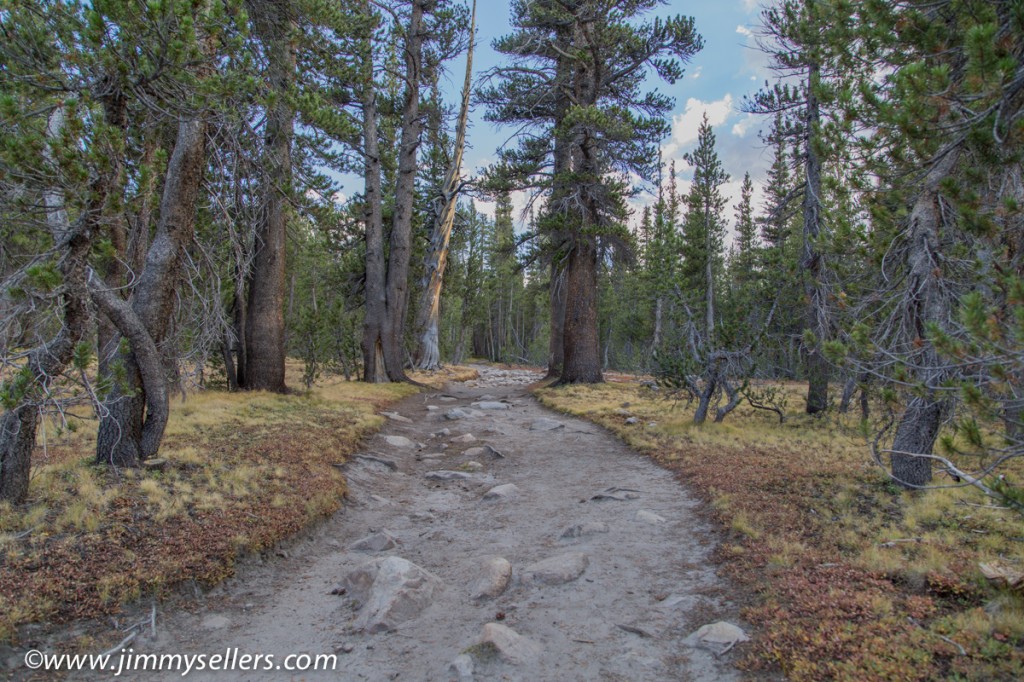 I finally had a chance to go through a few more of the Yosemite pictures from last month. I can’t believe it has already been a month ago. I went through and processed a few of the

panorama photos and HDR photos that I made. Some are fun, others are nonsense. I also went through the pictures of the day Josh and I went to see the big trees on our own. Giant sequoia trees, and they are giant. Pictures do them zero justice. We hiked up to a point that is only a mile from the museum and could tell that nobody goes up there. It was an amazing vista point, but since there was no road to drive up there, I doubt it gets many
visits. That was a fun day in Wawona that started out hectic and full of uncertainty. It definitely worked out for the best. Later we were able to find a spot and watch the sun set on Half Dome. People queue up and wait for hours to get the perfect picture of the “golden light” on Half Dome. Josh and I fell ass-backwards into a spot in a meadow and watched from there, with nobody else around. Josh was able to watch some of the football game by Peeping Tom’ing through a stranger’s window. My pictures are not the storybook pictures of Half Dome, but I’ll take it for my personal collection. I still think the best pictures are yet to come. I haven’t even gotten to the days with the amazing skies and mirrored lakes. Some of the newest pictures are HERE. 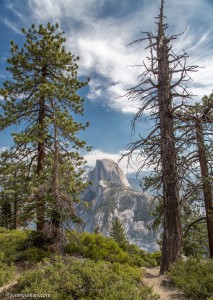 I finally had some time to look through pictures from Yosemite last month, September 2014. I have only made it through the first day and a half of pictures. I know the best are near the end of the trip, but I have to go through them in order. That is part of my CDO disorder.

We hiked the Panorama Trail on our second day in Yosemite. The group of 5 went together. The first day Josh and I set out on our own to circumnavigate would is called Mirror Lake or Mirror Meadow. It was a lake when I was here last year, and a meadow this year. Amazing what this planet does.

Pictures are HERE in case you are interested or overly bored. 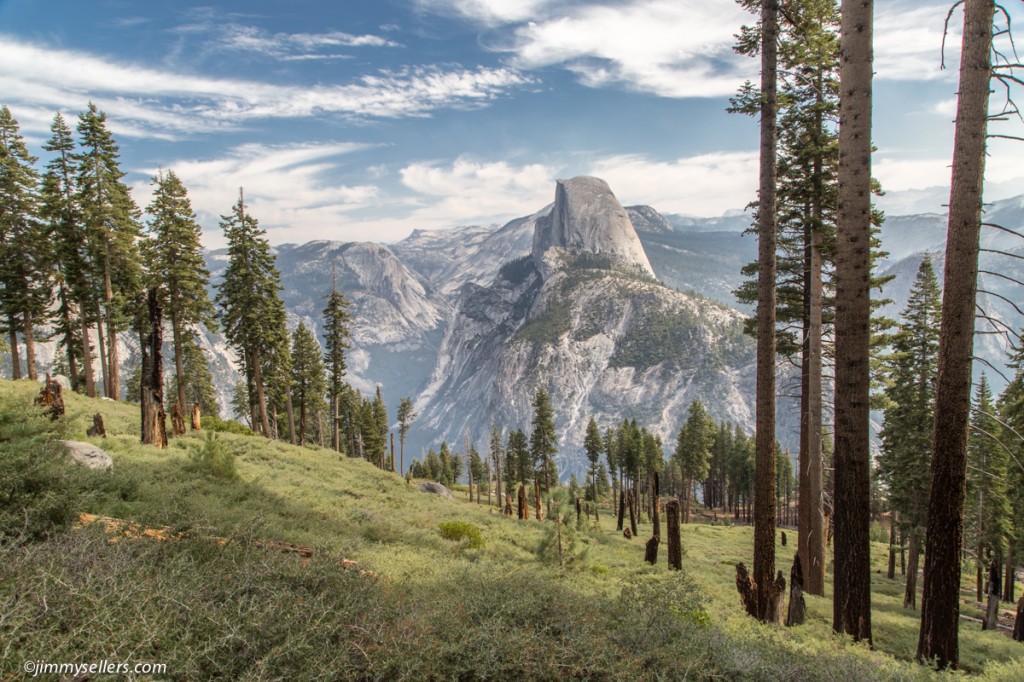