Last year Wifey and I spent some time in South Africa on safari. Leading up to that trip I was apprehensive and unsure of what to expect. It was a trip she always wanted to take, and I did the best I could to make that dream come true. Every second of the time we spent in South Africa and at Londolozi proved to be one of the greatest experiences in my life. We swore that we would get back there some day and do a vaster discovery of the continent. I didn’t imaging that it would be so soon. We are going back to Africa again this September. This trip will be in East Africa, Mt. Kilimanjaro, Ngorongoro Crater, Tanzania, and Rwanda.

We are planning to see a few different areas and varieties of safari this upcoming trip. Part of the trip is going to be in a tent camp. A camp that moves its location based on where the great migration of wildebeests and zebras occur each year. Millions of each animal travel through The Serengeti in constant search of water. I guess they don’t know you can get water in liter bottles now. It is supposed to be quite a spectacle. Our fingers are crossed that we see it from a hot air balloon. Another stop is Ngorongoro Crater, and giant crater formed when a volcano exploded and collapsed on itself several million years ago…oh wait, I think science says the earth is only 6000 years old. No, that’s religion, now I can see why people think it makes so much sense. I recently saw in a documentary that Ngorongoro Crater is the home to a large population of inbred lions. They did not appear to be too different from regular lions, the major differences were lack of teeth, no shoes, jean overalls, and they primarily drink moonshine.

The grand finale of the trip takes place in Rwanda. We will be staying in the Virunga Volcanoes for 4 nights and gorilla trekking. There are only 800 mountain gorillas left alive in the wild and some of them may be lucky enough to meet me. I plan to teach them sign language and the long forgotten art of cross-stitching. We will hike all day through the steep, muddy rainforest to spend time with the mountain gorillas. It sounds exactly like something I would do. I am fairly certain that Wifey is taking me there just so I get Dian Fossey’ed. Is it a coincidence that the life insurance policies on me just renewed? I think not.

I am starting a foundation to raise money before our trip. The foundation’s primary objective is to get the gorillas hair product and combs they desperately need. Yeah, humans don’t come from monkeys, whatever you say religion. 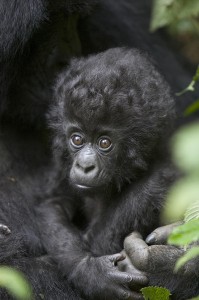 As a precursor to our upcoming trip I went out today in search of local wildlife to practice shooting photos. I came across the elusive Harford County “forest cows”. Apparently one jumped in my car and now lives in The Olympia. Lucky him. 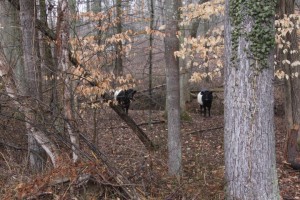 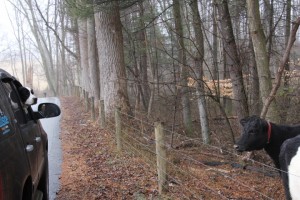