Day 45:
Today I met Xavier, or just X, hands-down the coolest dog of my trip.
I checked into and woke up at a hotel in Davis this morning. Not much geocaching will happen today. I need to catch up on real life work, obligations, and process through some of the pictures I have taken. I had to drop my van, Pervvie, off at La Mesa for a window replacement. I got her there 1st thing, and they were done by 11am. Amazing. I spent

most of the day in front of the computer, but when I did venture out, I found a super cute doggie geocache, and I failed at 1 multi cache. Hopefully I will rectify that tomorrow. I did get a lot of other things accomplished today, including a nice chunk of catch up work.

Day 46:
11,700 miles and counting.
This is the day I checked out of the hotel in Davis California. I spent most of the morning and early afternoon doing computer stuff, pictures, blog etc. I have weeks worth of picture processing to catch up on, and I got a nice hunk done. On the way out of town I made a point

to find some highly favorited and important geocaches.
My intent is to make it to the Napa old one, and then hopefully sleep at the Golden Gate Bridge. I started my day at a graveyard I finished my day at yesterday. I was wrapping up a multicache. Thank you to the CO for leading a blind guy in the dark. Are these wild turkeys always here because they feast on corpses?
I made out OK on my way out of the town of Davis. I spent a few hours navigating around a completely empty college town. It was the perfect day to drive wherever I want, whenever I want, and park anywhere I want. I found most everything I look for, but had a few disappointing DNF’s as well. Now I’m headed toward San Fran, with a stop in Napa.
My time in Napa went perfectly as planned. I jogged part of the way 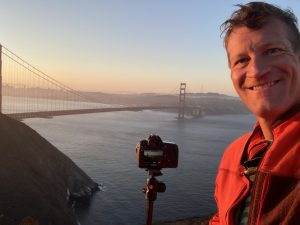 out, and all the way back, after finding the old ones along the skyline Ridge Trail. When I finished my jog back near parking, I had enough sunlight to do the multi nearby. That one was a lot of fun and very cute.
After that I started heading towards the ocean. It’s impossible to drive directly west at sunset, so I pulled over and had a pizza and some Dr Pepper. From there I drove to the Golden Gate Bridge and scouted out different overlooks. I found the perfect one and pulled in there for the evening. I took pictures throughout the night of 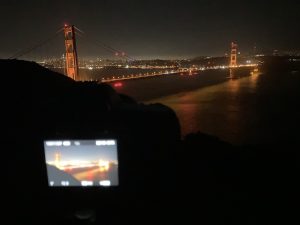 a lit up Golden Gate Bridge. I then woke up pre-sunrise and got ready to take pictures first thing in the morning of the sun rising over/under the Golden Gate Bridge. Everything went perfectly. That pull off I slept at is a bit of a rowdy party area. Those kids, am I right?

Day 47:
11,800 miles and counting.
I woke up overlooking the Golden Gate Bridge. I took pictures of the bridge in the middle of the night and then woke up in time to catch pre-sunrise and sunrise at the Golden Gate Bridge. Everything went perfect.
Now my hope is to go into San Francisco proper and bebop around there for a while on a Sunday, before a Labor Day holiday. My hopes are the city will be abandoned and empty.
Immediately after sunrise I headed to San Francisco proper. I was going to come into the city and drive around until it aggravated me to no end, and I had to split. But I at least had to get started. It was so early and a Sunday and a holiday weekend I assumed that I had the whole place to myself. I started in one area of the most favorited geocaches, mixed in with some personal ones I wanted to find for personal reasons. Obviously I had to take my picture in front of the Fuller House. After that I parked at the marina. I hopped on my 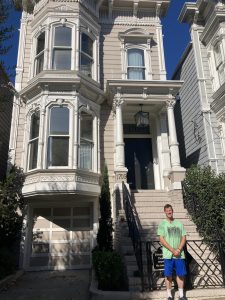 bike. I knocked off another five or six fun things in another cluster on the map, by bike. I was really on a roll. It was about that time when I needed to head to the piers, the busy place, the place that terrifies me. I checked if there was a baseball game. There was, and the local ball club was playing the Phillies. I don’t like baseball, but where I come from, everyone roots for the Phillies. I knew I had to go to this game, just to piss off people at home. They already hate me for this road trip. Now they can hate me b/c I saw their team play in San Fran. But then I decided not to do that, I would just keep navigating the city by van.
For what I think is the third time in this adventure, my wife has come to the rescue. Because of my go go go, I have to get things accomplished attitude and actions, I don’t do a lot of stopping and smelling the roses. I had this unbelievable opportunity dropped in my lap. I knew I wanted to walk around in San Fran. My wife told me I simply had to go to the ball game. So, I went back to my van, took a shower in the middle of a parking lot in the middle of San Francisco, 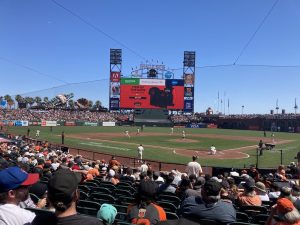 put on 100% clean clothes for the first time in days, and I caught an Uber to the ball field. Wouldn’t you know my luck, I buy a ticket from a scalper off the street, and I still end up in the luxury club box area. So, I enjoy a nice gourmet lunch, then go out and sit through a few innings in the heat. Make really nice conversation with the old fella next to me. Then I wander the entire stadium top to bottom left to right, just to see what a baseball field is. 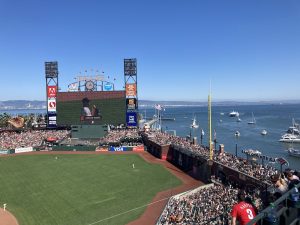 I got all my obligatory pictures and I moved on. Out front to the Willie Mays Hayes statue and then to start a walking journey around town.
I was looking at where I want to be on a map and thinking, I can’t do all that walking. That’s miles and miles of walking. I walk miles and miles and miles all the time. The difference is here I’m scared because it’s a city. It is safe to say that walking might be my favorite thing. It is also safe to say that cities are my least favorite thing. but I do know from historical fact that I can meet those 2 things in the middle, and have a glorious day. Everything will be paved? There’s no sticker bushes or wild animals going to try to kill me? Sounds like the perfect 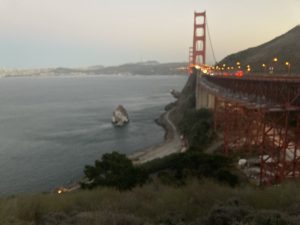 walking conditions, and for some reason I was still hesitant to walk 8 miles.
Even sometimes my idiocy amazes me as much as it does my wife.
Between the food and the Cheebah, San Francisco is the best smelling town I have visited so far.
I did so many amazing geocaches, visited so many amazing places for art, history, and fun, and got a lot of steps in. I almost robbed myself of that, because I am a laser focused buffoon.
I walked myself all the way back to the van, and took myself to the vista point off 101 at the GGB. That is where I will spend the night, and tomorrow will start to venture toward Yosemite for a few nights.

I did start an album of this trip that I am updating as I process. HERE.