I did not have to rally the entire student body to the quad, but I would have! The worlds next soaring legal eagle graduated on Saturday, Wifey. I am so proud of her. I don’t think I have ever been more proud of anyone. Graduating law school is definitely the biggest accomplishment of anyone I know, and I know people who coach little kids sports, fly planes, do math real good, and play softball with one eye.

We have been graced by the presence of my Texas Out-Laws throughout the weekend. They are leaving soon to spend the week down at the beach. The Williams’ clan made the northeast drive to be a part of the graduation and big celebration party yesterday. The party went off without a hitch. It was a lot of work and prep, but I think a good time was had by all. Wifey was happy, that is really all that mattered, the rest of the people could have fell and broke their necks in the bouncy house as long as she was happy.

Now begins 8 weeks of intense preparation for the bar exam by her and 8 weeks of sitting silently twiddling my thumbs for me. After I master the art of thumb twiddling it will be time to sit for the bar exam. After Delaware’s most ferocious testing of useless intellect, it is skyward bound to the east (right) for an amazing August Adventure. I still can’t get over how proud of her I am. If all goes according to plan, I can retire in about 3 years. 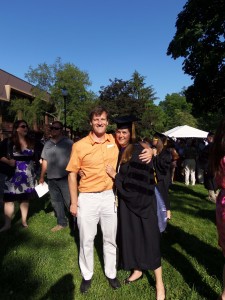 It has been a tougher time than I thought decompressing from such a mind-blowing journey. I was on cloud 9 for a while, and I still am most times. One thing that is helping is looking forward to a major milestone accomplishment from the Sellers Family. Lady Sellers, Queen of the Seven Kingdoms, will be graduating law school any day. Along with the achievement comes a party full of ale, Lords, Ladies, fighting, wenches… wait, no, that is not right at all. I think this will be the biggest accomplishment of anyone who has been lucky enough to have the Sellers name. Granted, I have only known a handful of Sellers’ and she stole the name from me, but that does not take away from the accomplishment. Along with the colossal accomplishment comes great reward. She was nice enough to let me have the Winter Carnival, so August is all for her. I haven’t come up with a name for it yet, maybe The August Affair? Hmmm, no, probably not a good idea. After the Bar exam the end of July, August is a free month until full time work begins. We have some great things in the planning stages for August. We started taking some steps on Tuesday and went to the doctor for some vaccinations, inoculations, and immunizations. The past couple days have been extremely rough. I never expected the side affects to be so horrid, but we have both been ill. Not really sick, but all the symptoms of sickness, which might be even worse. The mind says I am fine, lets do this, but the body does not cooperate. Whatever happens it will be well worth the experience.

I finally got around to making another montage video of my favorite Cheesehead and Utah visitor, Bradford. I wish there was something embarrassing to say or show, but unfortunately there is not. I wasn’t sure if music would help this video along, but apparently Bradford hates music these days. It’s never too late to add music.