Finally some pictures of wildlife HERE!

We woke this morning to the sunrise right outside of our zippered doorway. The flaps in our tent stayed open overnight, so I woke up facing east with a perfect view of the sunrise over the bush. I am sure it is preplanned to face the east. Regardless, it was quite glorious. Luckily no wild animals or giant spiders that live on our roof ate or poisoned us while we 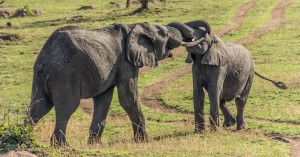 slept. Today was a long nonstop day. Breakfast at 7am and then on the road at 8 and moving nonstop until 6pm. The layout of the land and earth here is extremely unique from anything I have seen elsewhere. We started the morning off seeing a brand new baby giraffe. It was about a month old and still had the umbilical cord attached. I thought that was a joke from Robert, but no, there was still cord hanging underneath of the giraffe. Now that I am thinking back and typing this, maybe it was a joke and I was snapping photos of a giraffe’s wally. Either way, tiny baby giraffe, lets just leave it at that. The baby was probably not much taller than me. I think I could have tackled it if necessary. The mother was close by, so I did not try anything fishy.

The amount of wildebeests we saw is incomprehensible. There were nonstop swarms and herds in all directions. The herds were giant and look like a bee swarm that was really far off in the distance. I get this image from my memory of giant bee swarms in cartoons.

I can’t stress enough what an excellent difference it is to see the land filled with rock clusters. Later we saw rock climbing elephants and buffalo. They were planted in the middle of a rock outcropping, up high, and all alone. It seemed staged, as if they were solely there for our viewing pleasure. One of the elephants was playing a solo game of king of the hill. Rightfully, nobody wanted to challenge him for the title. He was up on top of a 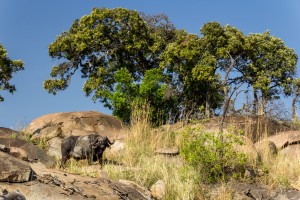 rock mound just surveying the land. He must be sure footed, we could not figure out how he got up there. Around the corner was a buffalo doing about the same thing. The buffalo was obviously posing for pictures. It had all the makings of a photo opp, minus the tip box. There was no other reason for him to have been where he was.

We took a nice lunch break around midday. Yummy minced meat, couscous, and avocado made into wraps. They really fed the shit out of us, and all delicious foods. After lunch we were back on the trail. The entire day was spent waiting at different crossing points of the Mara River. Sometimes up to thirty minutes. Wildebeests would gather near a crossing and everyone would hope they were going to cross. Watching a crossing of a herd is supposed to be the epic witnessing of a trip to the Serengeti.

We were driving away from our fourth or fifth unsuccessful wait when Robert bottomed out in the middle of a puddle and we got stuck. He is nothing like any other man I know. He heard the wheels spin once, stopped, engaged four-wheel drive, spin again, and he stopped trying. Sissy. As a man it is your duty to floor the gas until you are stuck in the mud up to your eyeballs in and inescapable hole. He called another truck and they were there within minutes. We were out and back on our way within five minutes. Lucky us. My favorite part is that Robert did not even get out to help hook up the tow chain, and when we were free he sped off quickly. No time wasted helping the other ranger bundle up the towrope and put it away. I guess I should not have laughed at those jerkstores that got stuck in the mud the other day.

Later, at our next attempt to check out the riverbanks, Robert commented that he was going to take me to the river. I obviously started singing the hit tune, Take Me to the River by The Talking Heads. Dr. Robert said, “That must be a really popular song, I hear people sing that all the time.” More evidence of what an ordinary, uncreative cheesedick I am.

So back to the Mara River banks for what proved to be another crossing fake out. The wildebeests and zebras will crowd to the edge of the river. The line of 4-legged animals can go on further than the eyes can see. Like staring at a trail of ants off into the distant, blazing sun. Easily tens of thousands all crammed together and falling inline behind whichever animal is lucky enough to be at the front of the line. They meander around, wanting to cross the river. They stare down the slope, thinking about jumping down and swimming across. They look back over their shoulder to make sure their buddy is not daring them to take the dive. Robert told us that it only takes one…if one makes the jump the entire line will follow, sometimes leading to a crossing that can last hours. Just one…that is all we need. I asked Robert to blow the horn, or lets get something happening to startle one of them into the river. And then, for no apparent reason, the entire herd does a 180 and slowly starts walking away from the riverbanks edge. It is a slap in the face to the natural order. That is the best description I can come up with for a Mara River crossing fake out.

We went on to find a lioness with a fresh kill feeding with her three cubs. That was really amazing. We watched for a while and got some great pics. The lioness had the newly deceased wildebeest by the neck and was dragging it into position for feasting. She first 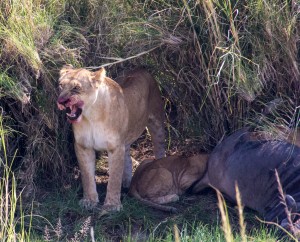 went to the soft underbelly, what is clinically called the taint. She does this to rip open an area that most exposes the softest edible parts, the intestines, stomach, yummy things like that. She rips open this area so the cubs can crawl inside the dead wildebeest and nourish themselves. I guess lion cubs have weak teeth and can only east soft food like baby humans and useless old humans. It was quite a site to behold, the sounds of ripping fur, then tearing flesh, then the releasing of gasses when the stomach and intestines are punctured. But it was all worth it to see the baby cubs smile while eating.

Once we started to move on Robert yells that there is dust off in the distance and turns his Land Rover into an Indy car. He said a crossing was happening, so hang on! The wildebeests and zebras crossing the Mara River have to be one of the most amazing natural phenomenons. We waited all day to witness one and I feel so fortunate that we got to see one. It is by far and away the highlight of the entire trip. Nothing could possibly surpass the crossing. It was worth the entire day waiting, and I would have waiting another day had I know what we were in for. The one we witness lasted about 10 minutes. They were making their way into the water in every manner possible. Some were simply walking in, others were diving like Greg Louganis pre-head injury, and many were tumbling down the hill ass over teakettle. Fascinating! Robert estimated about 7000 gnus crossed. I got great pics and some short video. I will never forget the lead up and the witnessing of this crossing, even if I see another bigger one some day.

After that it was time to head back to camp. On the way home we stopped at a shack in the middle of the bush and booked a hot air balloon ride for sunrise tomorrow. It seemed legit. So that is what we are doing tomorrow, a new, different way to die. At least I won’t be someone’s food. Another couple is going to do it as well. In typical young American fashion they asked the question, “Are you fully licensed and insured?” This really gave the rest of the nearby group a big belly laugh. This was a Turkish hot air balloon operator in the middle of the Serengeti in Africa. Of course he is not insured but will say he is completely. 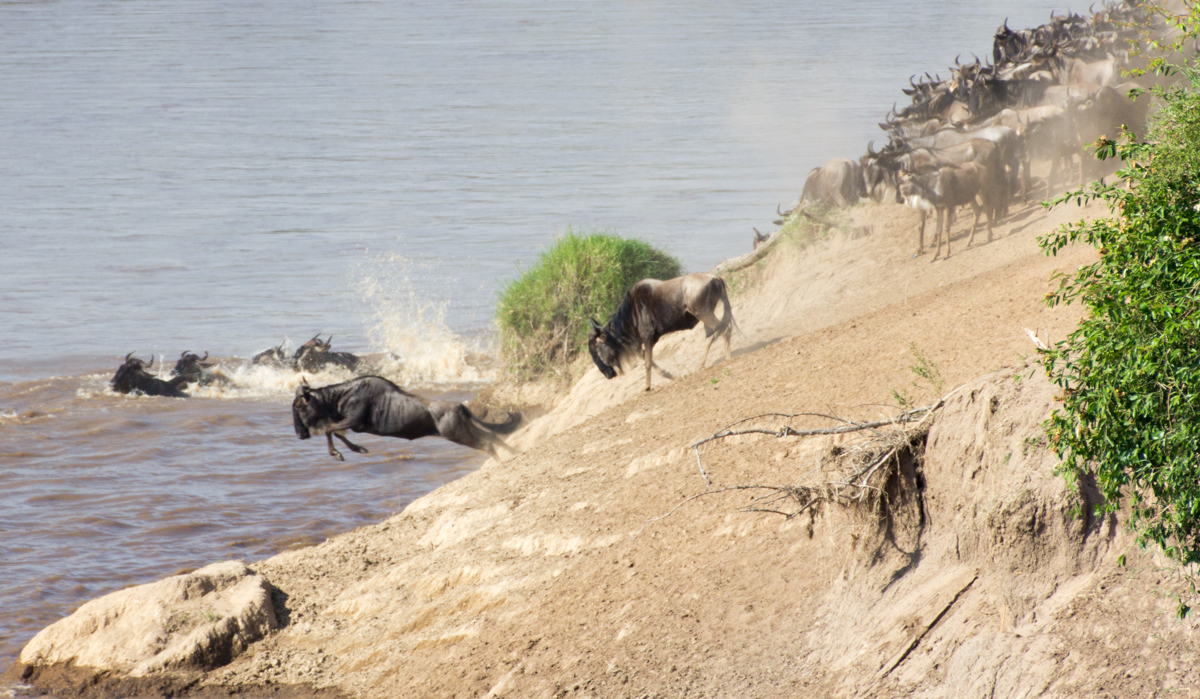