I had quite the enjoyable day on MT Crested Butte. It started snowing here last night and continued all through today. The mountain in Crested Butte is much smaller than many of the other mountains out here. Luckily size doesn’t matter when you’re having fun, that’s what she said.  I didn’t see anywhere on the mountain website that for $90 you were able to rent out the entire mountain to yourself on a Sunday. The only lift line I waited in was the one I chose to wait in, the first one up in the morning after opening time. I probably didn’t see 100 people by lunchtime. 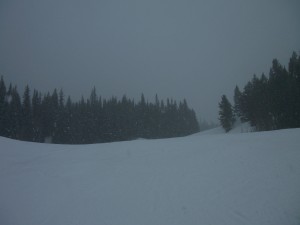 I tried everything I could today short of believing in god and praying, but I was unable to get it to stop snowing. Something miraculous did happen today though. There was a point in time where the snow was coming down as plentiful as I have ever seen snow fall. At the same time the sun came out and shone with a ferocity that could only be described as sun-like in brightness. This lasted for probably about a half an hour. It was quite a climate marvel to witness, the perfect storm of goodness. It was a vicious battle that the snow ultimately won in the end. I assume that is only the kind of phenomenon that could happen here, in this square shaped piece of paradise known as Colorado.

I continued my constant polling of the locals, mind out of the gutter please. Everyone I speak to that lives in these towns is not originally from them. Almost all came west, or moved because of their love of the winters, snow, skiing, and mountains. 4 out of 5 that moved here for the snow say that summer is now their favorite time of the year. I guess I know where we are going this summer.

I saw this sign today. Chairlift speed dating…that is completely new to me. I never heard of anything quite like this. What a town this is. No, I was nowhere near the Twister lift at noon.