When I hear someone use the word “millions” I immediately tune out whoever is talking. It is simply an overused, exaggerated, cliché of a number. With that said, I cannot believe how many millions of wildebeests and zebras we have seen in the past several days. Today was get up early, have breakfast, and then drive from one camp to the next. We were lucky enough to have Robert drive us from Under Canvas Camp to Klein’s Camp. Klein’s will be our newest temporary, yet more fixated to the ground home for the next few nights. 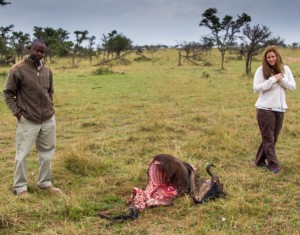 I don’t think they did this

The drive was several hours, but was completely through the Serengeti Park. Then entire drive is easily classified as a game drive. We saw some of every animal on the way out of the park. Driving was a good idea for several reasons. First, no small plane for Wifey. This reduces the possibility of me loosing a hand or arm due to blood loss. Second, a game drive from point A to point B. Third, we actually made it there faster. Even though it 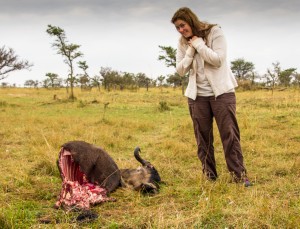 Will she take a bite?

was only a 20-minute shuttle bus flight, each airstrip was an hour from the camps. It would have been over an hour drive, 20-minute flight, and then another 1+ hour drive. That is a ridiculously stupid way to travel, and I made sure to tell everyone that is what I thought.

One of the highlights of the trip happened on the drive between camps. We were motoring down the dirt road with nothing in site except for the land and scatterings of wildlife. Out of nowhere a big heard of gazelles ran up on our right hand side. They ran along side of our jeep that was going at least 30 MPH. This lasted for about a minute and then they crossed in front of us at full sprint. You could tell that Robert also enjoyed the moment. He actually punched the gas to watch the gazelles keep up along side of us. It was obvious that when the gazelles wanted to cross, they would. No 30 MPH jeep was going to stop them. It was quite a surreal, Africa only moment.

When we did finally exit the Serengeti Park, we were on the lands that belonged to the Maasai tribes, and near their villages. Our next destination, Klein’s Camp, is a private concession of land that is leased from the Maasai people. The camp is located in a gorgeous game-filled valley. Per their description it has everything, wooded hillsides, rolling grasslands, midgets in tiaras, and forested riverbanks. I would soon find out they were not lying. The camp only has 10 rooms situated at the top and on one side of the mountain overlooking the valley. It is unbelievably impressive. The camp and company that own the camp lease the land from the Maasai. Through this arrangement the camp is allowed to have their lodge here, show horrible tourists the animals, and in exchange the Maasai people get money from the company and visitors for their village. The company also boasts that they have set up schooling and medical clinics in and near the local tribes villages. I want to believe it is beneficial to the local Maasai people.

We are planning to visit the Maasai village one day while we are here. It is a weird and hard for me to comprehend relationship. I am assured that the arrangement between the Maasai tribe and Klein’s Camp is mutually beneficial. I am sure that is just my ugly American white guilt kicking in. I can’t help where I was born or which sperm I hatched from. I am looking forward to seeing the village and visiting with the people. It will be a much more cultural experience then we had last year, and probably ever had in my life.

Once here at Klein’s we got situated. We met our ranger/tracker for the next few days. I decided to take the night off and just stay in. I developed a case of cuckoo belly somewhere along the road today. It ended up being a good idea that I took the night off and not go on the game drive. I had to take 2 showers…if you know what I mean. Diarrhea shit all over the place. So Wifey went out alone on the game drive and then we had dinner together at our room. You can read about whatever happened tonight at her blog if you want. Good luck with that. Even with this minor setback of a sour stomach I am still the luckiest boy alive and Wifey is lucky enough to be along for the ride with me.